Home > Reviews > Suzuki Jimny Review
Towns, hills, streams and sand - the Jimny performed well in all places but especially in the backcountry

The Jimny: The art of getting there (and back).

Recently I had the opportunity to drive the new Jimny, a vehicle I had read a lot about.  Having planned to fish some remote rivers and streams in the King Country

All Jimny’s have 3 doors and come in manual and automatic. Mine was a 5 speed manual and came with a surprising range of features such as sat nav, cruise control, 6 airbags, ESP, air

conditioning, lane departure warning and of course a true 4 wheel drive system. With all models retailing between $26,000 to just under $30,000 you do get a lot of bang for your buck.

Like many anglers I am basically urban based. The car I choose therefore has to be able to cover a lot of different purposes from being a round town vehicle to getting me to (and back) from a range of fishing venues. So, having a car which is capable of off-road back country travel is important. But as often travel to fishing means long open-road journeys, comfort on the highway is also a consideration.

My first impression of the Jimny when I picked it up in Auckland was very good. Whatever else you can say about the car it does look impressive. With a retro square, almost military shape, it certainly looked to be a serious and capable machine.

When you open the boot however you realise how small the vehicle is. It is only 3.48 metres in length making it the shortest serious off-roader on the market.  The luggage space when the back seats are in use is almost non-existent. Having four anglers with all their gear would be an exercise of logistics. Consequently, I regard the vehicle as really a 2, or at most 3, seater on any long journey as the back seat will usually need to be down to accommodate any luggage and equipment. And unlike my Vitara, fly-rods will need to broken down to fit them inside. 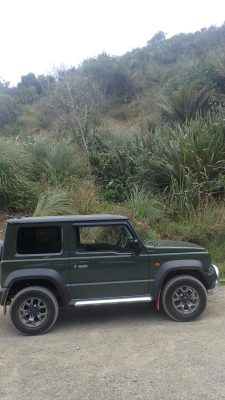 My plan was to take the Jimny to some remote rivers in the King Country and to test it on some pretty steep country which usually takes around an hour or more of hard walking to reach. But first I had to travel down the motorway to get there.

Having ridden in earlier Jimny models and found the open road driving to be rather harsh I was pleasantly surprised at how comfortable the ride was on the open road in this latest version. The Jimny is not built for speed and in the higher gears the acceleration tended to be quite sluggish. Road noise was OK (though at the speed limit you felt that the car was straining a little and I kept looking for a higher gear).

What I did not like as much was the soft suspension which caused some roll when cornering (possibly accentuated by the high driving position). On winding backcountry roads where the camber can be quite disconcerting at times, it meant keeping the speed right down.

But it is for its off-road ability that the Jimny is most noted for. And there it shone. When low ratio was selected it seemed able to crawl up impossibly steep tracks and through some very rocky streams without a pause. I cannot say I am a great off-road exponent but I came to the conclusion that if any other vehicle could negotiate a track than the Jimny would handle it with ease.

With its compact size and superb construction, I found getting to the fishing was for once almost as much fun as the fishing itself. It has most of the mod-cons you expect on a modern car and some extras that came as a surprise such as the automatic dipping of the its headlights as another car approached.

There were 2 things I think the Jimny needs however. Firstly is a rear vision camera as standard. Driving on narrow tracks where turning was tight was made much more difficult without the camera. There were times I had to get out when backing to see how close to a bank or ditch I was. To me this is one vehicle that really needs such an aid. The screen is there and so it should be an easy fix. And secondly I would like a place to rest my left foot on long open road drives. A small thing but one that would add greatly to my comfort on a long journey.

So, in short, I found the Suzuki Jimny to be not only funky and fun but a very serious and extremely capable off-roader that will get you to and back from some adventurous back-country fishing. It is a go anywhere vehicle when there are no roads and this is its major appeal. The fact that it is relatively comfortable on a long open-road journey is a bonus. Just don’t expect to carry much luggage!

Would I purchase one? Yes if I did a lot of fishing in remote locations. No if it meant long hours on the open road getting there. I thoroughly enjoyed my time with the Jimny but as most of my driving is on highways and in urban areas I will stay with my much more sedate Vitara .But I would jump at the chance to take one out for another swing through some of New Zealand’s back-country.

So if you get a chance to drive this little car that can….grab the opportunity. It certainly opens up a wide range of new opportunities.

See more about the Suzuki Jimny