Home → How to Fish → The trout larder → Mayflies

There are about 40 species of mayfly in New Zealand and all of them are unique to this country - they are not found anywhere else. Around the country and at different times of the year rivers and lakes will see different species emerge. And when often the trout become very selective so there is no one pattern, colour or size that will suit all conditions. It is therefore best to have a selection within your fly-box (and ask locals what is working). 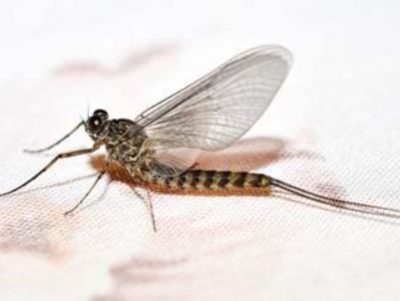 The deleatidium is the most common and widespread mayfly found throughout the country.

The larval stage where the mayfly is still living in the water is the most important to anglers and several flies that imitate the generic pattern that covers the most common insects of the mayfly genus.

Many regard the mayfly as the the quintessential trout food. A beautiful insect that lives the vast majority of its life under water, it is known to thrive in clear clean water. Where mayflies are found in abundance it means the river or lake is in a healthy state.

Found on the undersides of river stones, they are easy to identify by their three long tail filaments. They can often be found under (and on) rocks in fast moving water. 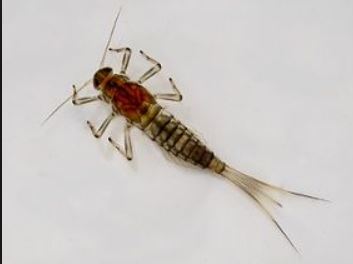 When they move from under rocks, and drift downstream in the current, the fish feed on them. In the evenings they will rise to the water surface to hatch into the adult stage. This is the time that they are most vulnerable as they can get caught in the water film making them easy prey to hungry fish. This is especially true on warm still evenings. Often if there is a breeze blowing the mayfly finds it easier to break through the surface film and so spend less time for the trout top target them.

The lifespan of the adult mayfly is very short - in some cases only 24 hours but are an important part of the trout diet.

They are vulnerable to trout as they move from the water to emerge in the adult form and when they return to the water to lay eggs. After they have laid their eggs they usually die and can often be seen fluttering in small circles on the water surface (and are often called spinners).

When fishing and you see mayflies emerging off the water (and this can happen at anytime of the day and any time of the year) you will often see dimpling rises as trout take advantage of this food source. As most mayflies are being caught while trying to free themselves from the surface film the rises are usually gentle and not particularly splashy. If a trout is rising to take an emerging mayfly and it does free itself from the water film you can be treated to a trout that rises clear of the water in a last bid attempt to catch it's fleeing prey.

No other insect has captured the fly tiers imagination more than the mayfly.

From the various forms of the Pheasant Tail to imitate the larval stage, small winged wet flies such as the Greenwell's Glory that imitates the hatching stage, the various dun patterns such as the Adams fly that imitates the adult through to the spent spinner patterns that represent the dying adult mayfly, there are more variations of flies that represent this small insect than any other. 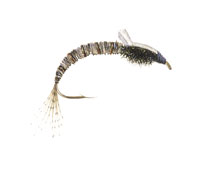 NZFishing.com is the complete guide to New Zealand trout and salmon fishing.